Language, culture and ancient ways of life are taught through fun and innovative methods including traditional games and field tours.

Dhanya Narayanan, now an IT professional living in California, once wrote about a chance encounter she had while on a train trip to Kerala. She was a schoolgirl at the time, reading the books of her favorite author MT Vasudevan Nair, when who should get on the train from Alappuzha and sit right in front of Dhanya but the writer himself! But Dhanya didn’t know it at the time, there was no Google to show him a picture of the writer. So, Dhanya ignored the man who was watching her reading her book while keeping a stack of her other books next to her.

Amused, he started a conversation with her, evoking this precious author of hers. Dhanya fought tooth and nail for its author, while the stranger dismissed each of his arguments, calling the author too common, hanging on to nostalgia. It took them the whole trip to find peace and the man to leave him a package, a business card coming out of it. It was of course MT Vasudevan Nair and Dhanya, ashamed of his behavior, wrote a big apology to the writer. In return, he sent her all of his books, signed. They stayed in touch for a long time.

Dhanya’s story, which she wrote in her school magazine 25 years ago, is relevant to the story we are telling now. How close are the children of Kerala today to their mother tongue. In the magazine article, Dhanya wrote that she considered reading Malayalam books “below her dignity”, reading only novels and short stories in English until then. With a charming honesty that can only come from school children, she wrote about how reading MT’s books changed her whole perspective and opened up the world of Malayalam literature to him.

A child in Malayalam Pallikkoodam with a slate saying, Malayalam is my language

Twenty-five years later, the situation has only gotten worse, even with a law that insists that the mother tongue be taught in all schools. A few years ago, Archa, a student over 2 years old, was at a bus stop in Thiruvananthapuram and discovered that other children her age were asking the driver of every passing bus where he was heading. She asked them curiously why they couldn’t just read the signs on the bus. It was then that they said that they could not read Malayalam.

“It was one of the triggers of the Malayalam Pallikkoodam movement,” explains Jessy Narayanan, Archa’s mother and freelance journalist. The movement, founded by poet Madhusoodhanan Nair, was born after a group of journalists approached it with this very urgent question: Schoolchildren were growing up unable to read or write Malayalam. It didn’t stop with the schoolchildren. Further research by this group of journalists showed that a number of graduate students could not read their mother tongue.

“You cannot blame the parents and ask them why the children were not sent to Malayalam middle schools. Many of these children come from ordinary families and are admitted to Kendriya Vidyalaya schools where they have to pay little or no fees. It is also easier for them to change schools when parents are in transferable jobs. However, little Malayalam is taught in KV schools, ”explains Jessy. 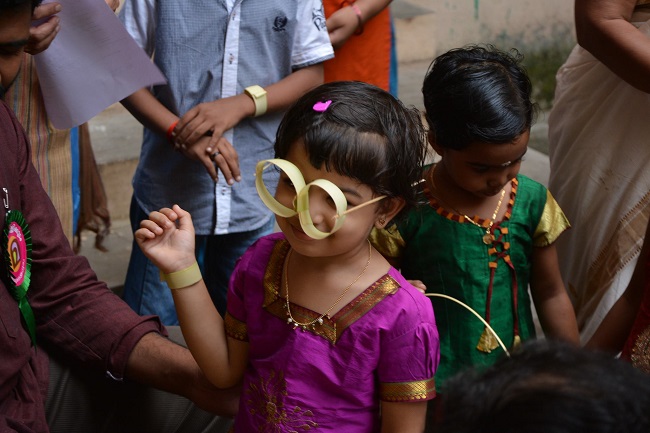 Children learn the language and culture through games and songs

Malayalam Pallikkoodam began Chingam 1 of the Malayalam calendar – the month of Onam which falls in August – in 2014. Parents took their children on Sundays to the Shishuvihar School in Thiruvananthapuram, which was praised by the founders of Pallikkoodam. “It was not just about teaching Malayalam as a language, but also about bringing the children closer to the culture of Kerala, to understand the way of life of the first generations. Trained primary school teachers taught them through songs, poems and games. If it is imposed on them in the form of lessons and exams, they do not learn it well. So there are no tests or certificates in Malayalam Pallikkoodam. Children learn while having fun, ”says Jessy.

At the start, there were 100 students aged five to 14. But then the number rose to several hundred.

These are not age-based classes, but there are categories that children will be placed in based on their knowledge.

Three years later, the then Minister of Education, C. Raveendranath, visited the Pallikkoodam and was very impressed with the methods followed. He was greeted by children knocking coconut shells. He offered the government help and the organizers of Pallikkoodam asked for a public school that they could use so that they didn’t have to take so much cost (Rs 500 per month) to teach children their native language. In due form, the Thycaud Government Model LP school was made available to Pallikkoodam and the fees were halved.

Over the years more and more students have joined and the classes have become more experimental. The children were taken to the field to see the rice fields and other crops, to play in the mud. Madhusoodhanan Nair encouraged age-old habits like having open classes, writing letters on the sand, etc. 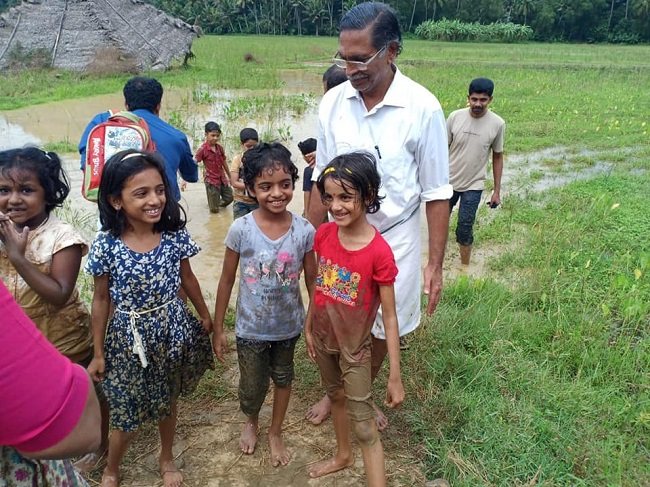 Visit of a field – Madhusoodhanan Nair with the children of Pallikkoodam

“Every ‘naadan’ (traditional) games you can think of have been played. One of the reasons I took my kids there was because they couldn’t play these games with other kids in a city neighborhood. Somehow, such a practice did not exist. I didn’t want them to miss out on all the childhood games and fun they could have, ”says Remya, who sent her seven and eight year old children to Pallikkoodam for a while. .

Teamwork was also encouraged and the children helped each other, the older ones helping the younger ones. On special days, the children ate home-cooked curries and ate their meals together. “They are encouraged to give and to receive,” says Remya.

What really impressed her was the way the teachers asked children to be strong and clear, as opposed to adults who silenced children to be silent all the time. “It would increase their self-confidence so much, being encouraged to speak loudly. They would not develop inhibitions, ”she adds. 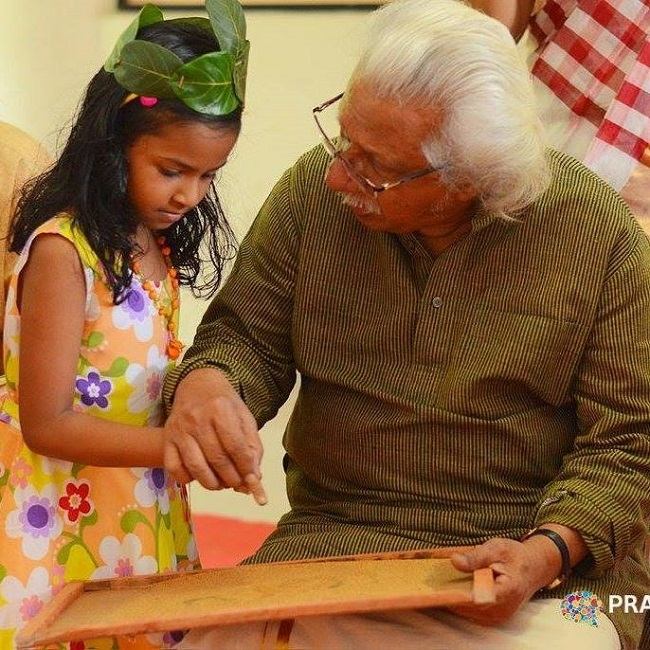 For Lakshmi Priya, who works at the University of Kerala, it was important that her son learned his Malayalam at a young age. She took her youngest child when she was six, just months before COVID-19 hit the country. “Children who attend ICSE or CBSE schools do not learn the language well. The study programs mainly give importance to science and mathematics subjects. I see it in the way my oldest son, in class IX, studies. The Pallikkoodam initiative teaches not only Malayalam, but everything that reminds you of Kerala – the plants and grains of Kerala. Many children saw a field for the first time in their lives on the trips Pallikkoodam took them. “ 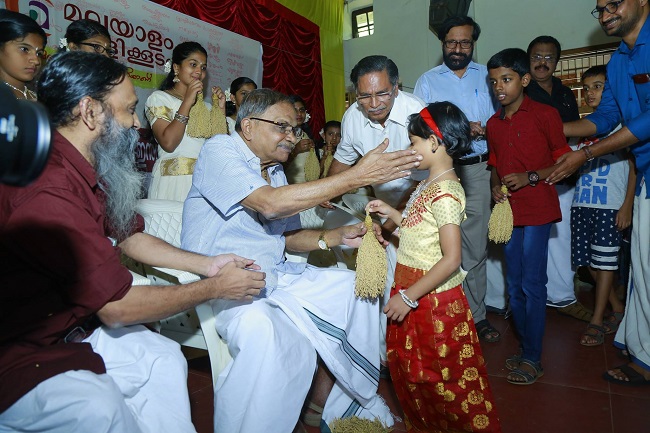 The writer MT Vasudevan Nair with the children of Pallikkoodam

When COVID-19 hit, classes continued online and for free. The teachers did not take any fees when they taught Malayalam to the children on Sundays.

“Parents tell us that on school days they had to forcibly wake children and send them to school. But on Sundays, the children would wake them up and ask to be taken to Pallikkoodam, ”explains Jessy.

The initiative has grown over seven years, with around 350 students now attending classes. A branch had started in a hall of the Technopark but had to be closed during the floods of 2018 when it was transformed into a temporary shelter for emergency equipment. There are students who joined in 2014 and still continue to attend Pallikkoodam classes. Other districts have tried to emulate the initiative but none have prospered so far. Hopefully they will resume too, and direct classes will also resume once COVID-19 is gone from our lives, Jessy hopes.

kill a mockingbird, by Osmund Agbo