The Pulitzer Prize winner How much does it cost to live? »At the PORTA ATHÈNES theater 9.84

The Pulitzer Prize winner How much does it cost to live? »By Martina Mayok, creation on October 16 at the PORTA Theater, directed by Thomas Moschopoulos

A bold project that challenges stereotypes about people with disabilities and explores the ways in which social class, race, ethnicity and wealth can create gaps between people, even if they crave connection.

How much does it cost to live? (The Cost of Living) is an honest and authentic work that invites the public to consider different perspectives of privilege and human contact, through two pairs of mismatched individuals.: a former truck driver and his recently paralyzed ex-wife and an arrogant young man with cerebral palsy and his new caregiver.

Four people are struggling to cope with their disability. For two of them, the handicaps are external, but each discovers that they are hiding internal, as they fight together to redefine their values. Values ​​that bleed after the blows of an implacable reality, which crushes human expectations with cynicism. What is it like to live in the end?

To just survive or something more? And what is the cost that you have to pay? How long does the isolation imposed by the productive lifestyle last to make ends meet financially? Who are the outcasts today and is it easy to lose everything overnight? A work both tender and relentless of lyrical realism, which awarded the young Polish-American author the Pulitzer Prize in 2018.

This important work by Martina Mayok was created by the development of John’s solo, Who’s Here From Cambridge in 2015, where in the original form of both characters, the author added a second pair. It premiered at the Williamstown Theater Festival in Massachusetts on June 29, 2016. He then performed at the New York City Center in a production of the Manhattan Theater Club, which officially opened on June 7, 2017. In addition to Pulitzer, Cost of Living won two Lucille Lortel Awards.

A few words about the author

Martyna Majok was born in Bitom, Poland, in 1985. At the age of five, she immigrated to the United States with her mother. She grew up in New Jersey, an area of ​​working class immigrants, where she attended her first schools.

He graduated from the University of Chicago, Yale (Yale School of Drama) and the famous Julliard School in New York. From an early age, she was interested in complex social and economic issues; her first work was Mouse in Jar, a story about a mother with Stockholm syndrome and her two daughters living in an underground apartment. The Friendship of Her Thighs, another of her works on violence against women, received the Jane Chambers Student Feminist Playwriting Prize (2011). ReWilding presents an excluded and marginalized, strange and forgotten community.

In Queens and the one-act play, John, who is here from Cambridge, tackles a topic inspired by his personal life, the challenges of immigration and the efforts to converge. Her mother, a Polish immigrant, and her struggles are her greatest inspiration. For Mayok, the theater is a place of search for the truth. She considers her directing to be the clarity of the drama and her ability to transfer the images she observes to the stage. She does not invent worlds, but creates from those that exist, learns from life and often represents it in its most painful form. 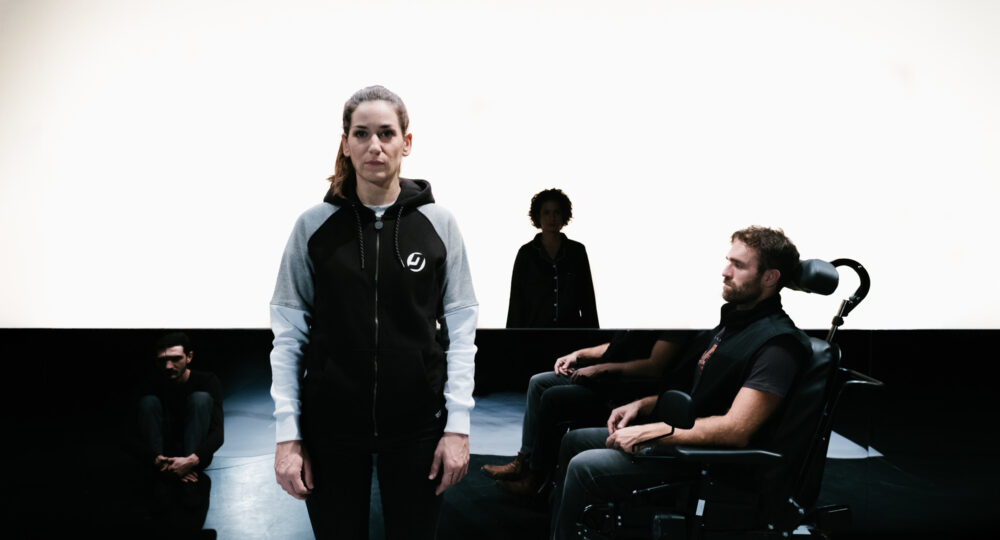 The show is sponsored by the Ministry of Culture and Sports

The entrance to the DOOR will always comply with the health regulations in force for entering purely enclosed spaces. Concretely, spectators will enter after a mandatory demonstration at the entrance [a] vaccination certificate or [b] sickness certificate, issued thirty (30) days after the first positive test and its validity lasts up to one hundred and eighty (180) days thereafter by him in combination with a police identity card or a driver’s license or a passport or other identity document, in order to carry out an identity check on the above.

The above certificates are displayed either in paper form or electronically through the viewer’s mobile device, which the owner or legal representative of the company (or authorized person) electronically scans by the special application of the article. 33 of law 4816/2021 (A ‘118) Without Covid GR. Alternatively, if the foreigner is from a third country (outside the European Union), the people in the previous paragraph check the above certificates on paper.

The above obligations include minors twelve (12) years old and over. Minors from five (5) to eleven (11) years old can, alternatively, submit a self-test declaration (self-test) of the last twenty-four hours, which is carried out by either parent. , even if they do not have custody or guardianship. No physical presence of the parent or guardian is required.

Wearing a mask is compulsory in all areas.